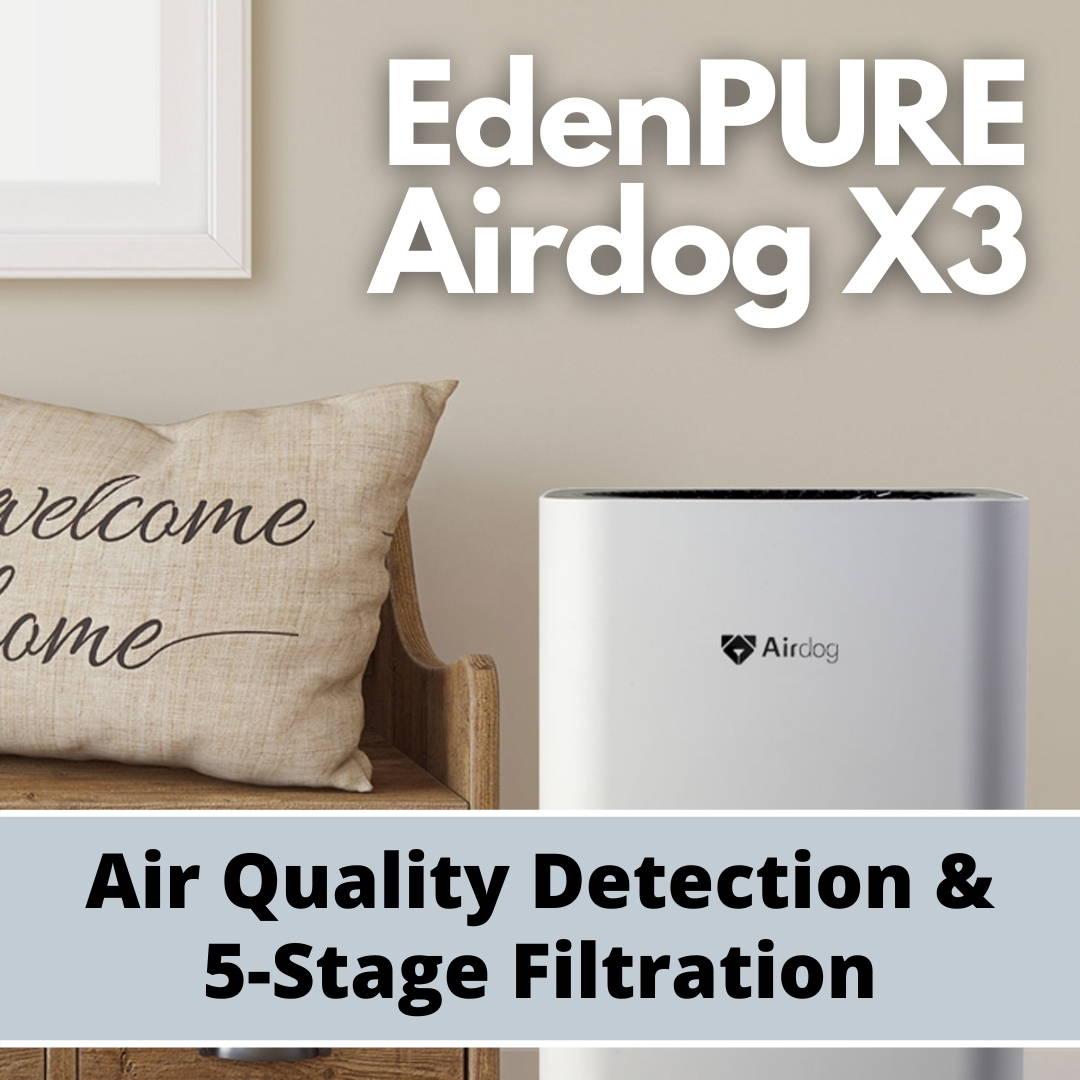 No Filters to Replace 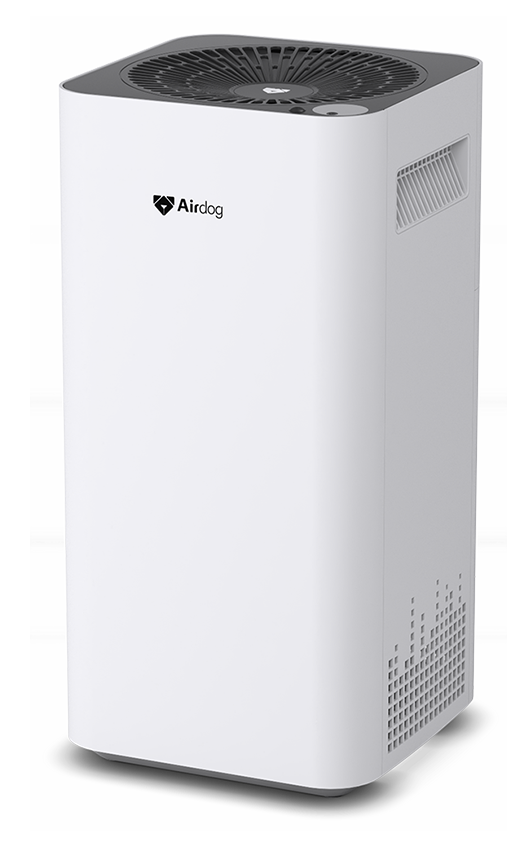 SUPERIOR TO ANY HEPA

NO FILTERS TO REPLACE - watch it clean before your eyes

EdenPURE® has done it again. A select few are getting ahead of the line to experience a true breakthrough developed and perfected out of pure necessity.

The revolutionary EdenPURE® Airdog® X3 captures and kills 99.9% of everything in your air.  Bacteria, viruses, smoke, dander, pollen, pollutants, dust, mold, ozone and odors are all targeted and virtually eliminated with this - the world’s best air purifier!

You can now get the new EdenPURE® Airdog® X3 for the lowest price available with your discount, making the new Airdog® X3 the world’s most effective air purifier for your money.

The Airdog® X3 runs silent, passing air through 5 stages of purification to guarantee the cleanest air in your home or office.

Aptly named because, as your companion, it persistently attacks the dirty air in your home. The EdenPURE® Airdog® X3 is a must-have device for your home or office for anyone who has tried and failed with any of the dozens of inferior air purifying “fans” on the market.

Like the EdenPURE® Airdog X5, shown in this video, the Airdog X3 has an Air Quality Display and Color-code lighting to show you whether your home air is dirty or clean.

In our quick demonstration of the breakthrough Airdog, you'll note that even cleaning chemicals in another room can effect the air quality throughout the home.

And, with the new release of the compact Airdog X3, owning an EdenPURE Airdog in your home is more affordable than ever!

Kills and Removes 99.9% of contaminants in your air 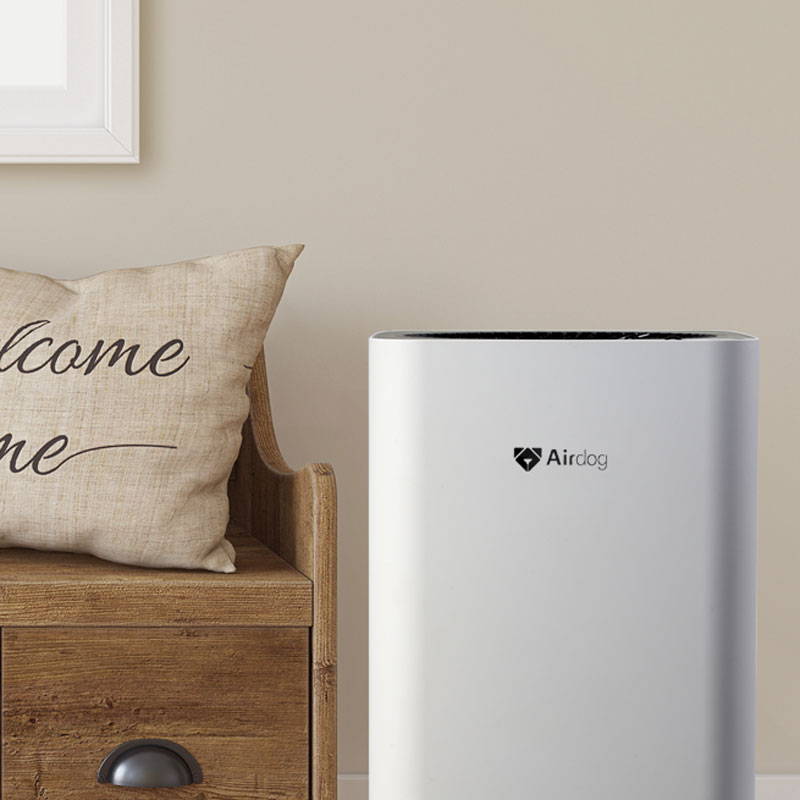 The EdenPURE® Airdog® cleans and removes microscopic particles as small as 14.6 nanometers. Most allergens and bacteria are over 30 nanometers in size and so are easily removed.

The Airdog® X3 is a one-of-a-kind air purifier that will improve your health and set a precedent for eco-friendly air purifiers that protect you and your environment.  The sleek and modern Airdog® requires no replacement filters or UV bulbs, allowing uninterrupted use with maximum benefit.

The Advanced Ionic Wind filtration technology is proven to remove 99.9% of impurities.  It will completely purify a 16’ x 18’, 180 square foot room in 20 minutes.

Developed out of desperation for some of the world’s most critically polluted areas like China, India and southwest Asia, the Airdog® X3 has broken the barrier for clean, pollutant-free air.  The technology within the Airdog® X3 filters out particles as small as 14.6 nanometers.  And since most allergens and bacteria are over 30 nanometers in size, essentially all harmful microorganisms are banished from returning to your room.

The Airdog® X3 measures and displays the air quality in your room and self-adjusts its fan speed based on how dirty your air is in the room.  When your air is clean, it automatically enters a maintaining mode.  This is when the fan shuts off and air flow continues silently through an ionic field acceleration.  This means there is ALWAYS clean, fresh air circulating in your space.

Dirty air enters from the bottom of the unit where the quality of air is measured, calculated and displayed in a large LED number for you to see.  The polluted, dirty air is pre-filtered through a screen to remove hair, large dust particles, dander and more.

Then, plasma emitter wires supercharge the air particles, instantly killing any living organism like bacteria, viruses and molds.  This process charges the ions in the air, forcing them through the Airdog® Ionic Field into electrostatic collection plates that gather all of the harmful particles like a magnet.

The clean air remaining passes through one final purification stage removing all unused ozone from the air.

A study of the process is simply amazing.  The EdenPURE® Airdog® X3 purifies and cleans the air - through and through - leaving  nothing but safe, healthy, breathable air for you, your family and pets. 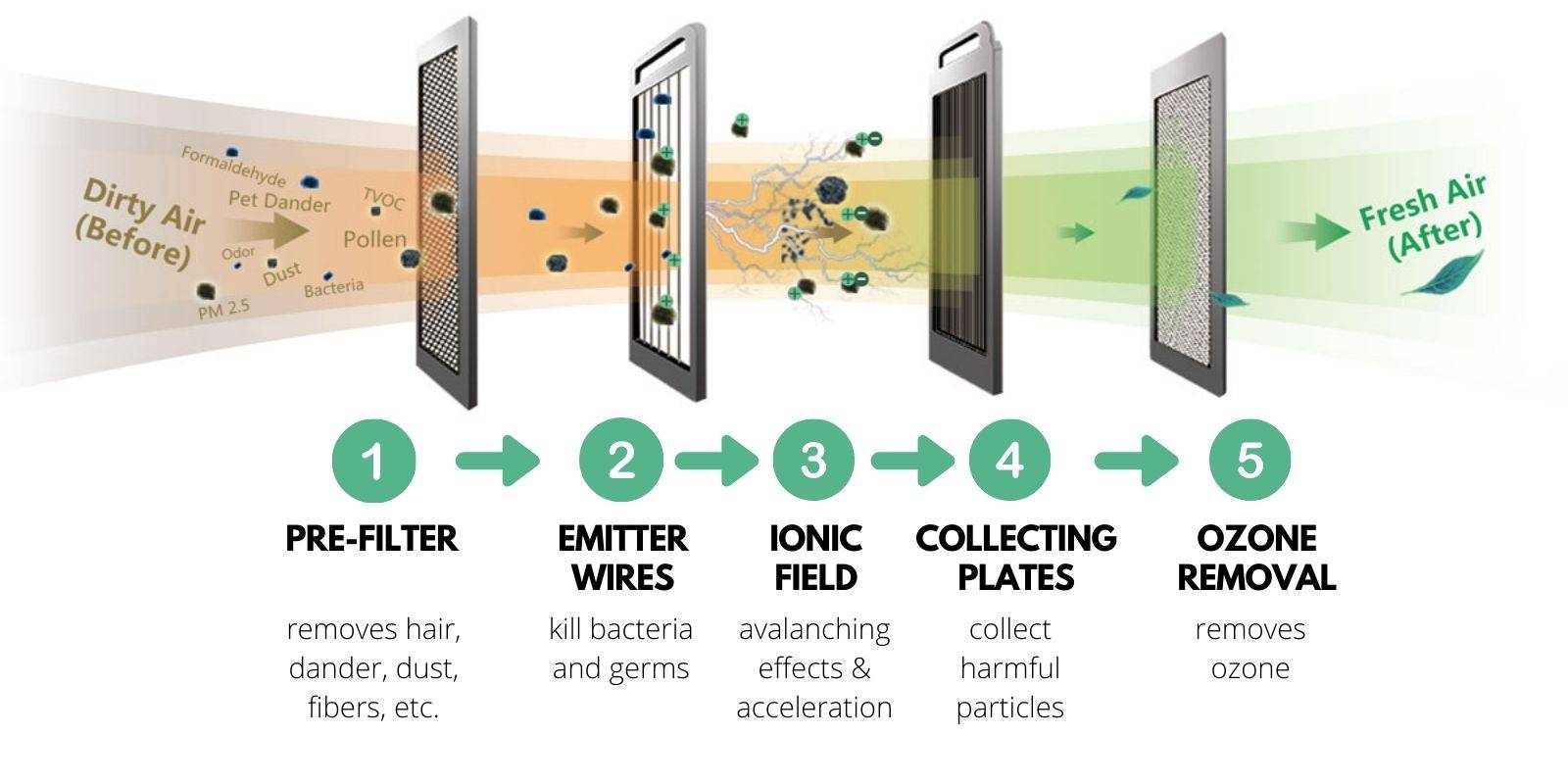 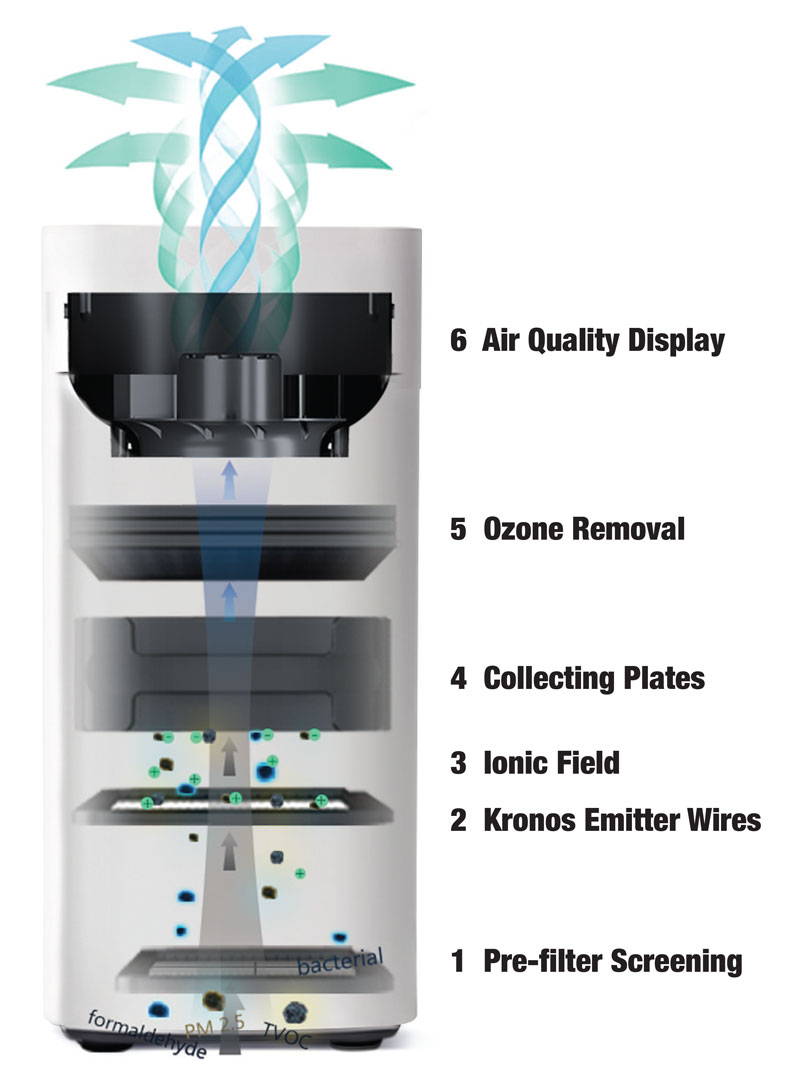 The remarkable EdenPURE® Airdog® Mini is the best portable, home air purification unit in the world and it’s very easy to see why.  With its five stages of air purification, air quality indicator, eco-friendly design and smart control operation, the EdenPURE® Airdog® Mini not only wipes out the competition, but thoroughly wipes out dust, smoke, dander, bacteria, pollen, viruses, odors, germs and more from your air, giving you the healthiest breathable air possible.

Collecting Plates are washable and reuseable

1. Pre-Filter Screening - air from the room gets pulled into the Airdog® from the bottom, back and sides of the unit, leaving the front clean for an elegant look in your room.  The first stage of cleaning is the pre-filter.  This stage catches large airborne items like hair, dust, feathers, dander and other particles that are generally visible in the air.

2. Kronos Emitter Wires - this second stage uses patented hair-thin wires which produces a “plasma electrical field” by which bacteria and germ cells are ruptured and effectively killed.  This ionizing field changes the charge of the structure of cells including allergen and disease-causing organisms.  Concentrated ozone is generated, to ensure that only pure, bacteria free air is returned.

3. Ionic Field - after charging the ions in the air through the emitter wires, this area, called the ionic field, is where the air accelerates silently, without a fan, creating a natural force of wind to push the air through the remaining purification stages and back into your room as 99.9% purified, healthy, breathable air.

4. Collecting Plates - which eliminate the need and expense of filters whereby the emitter wires change the ionic charge of atoms and cells to a negative charge, killing organisms like bacteria. The positively charged collecting plates then pull the negative ions up and through them like a magnet pulls metal.  Here, the collecting plates gather the “dead” or negatively charged particles.  This series of collecting plates can be periodically removed and wiped down to remove the junk gathered from your air.  It is also dishwasher friendly for thorough cleaning.

5. Ozone Removal - while low levels of ozone are not harmful, the Airdog® supercharges the dirty air through the early stages of purification through ionization and ozone generation.  This final stage removes ozone from the returning clean air.  This would also include any previously occurring ozone in the air of highly polluted cities and countries whether occurring only on hot “alert” days or from man-made pollution alert days.

6. Air Quality Display - this easy-to-read indicator tells you the quality and cleanliness of your air.  As you run your Airdog®, you will be able to actually see the air quality in your area improve.  A simple test of the quality indicator is when the Airdog® is sitting on carpet.  Carpet is notorious for holding allergens, germs, dust and more.  Shuffle your feet around the bottom of the unit and you’ll see the air quality drop.  Over time, the Airdog® will remove these dangerous particles from your air, thereby reducing the amounts left in your carpets and furniture. 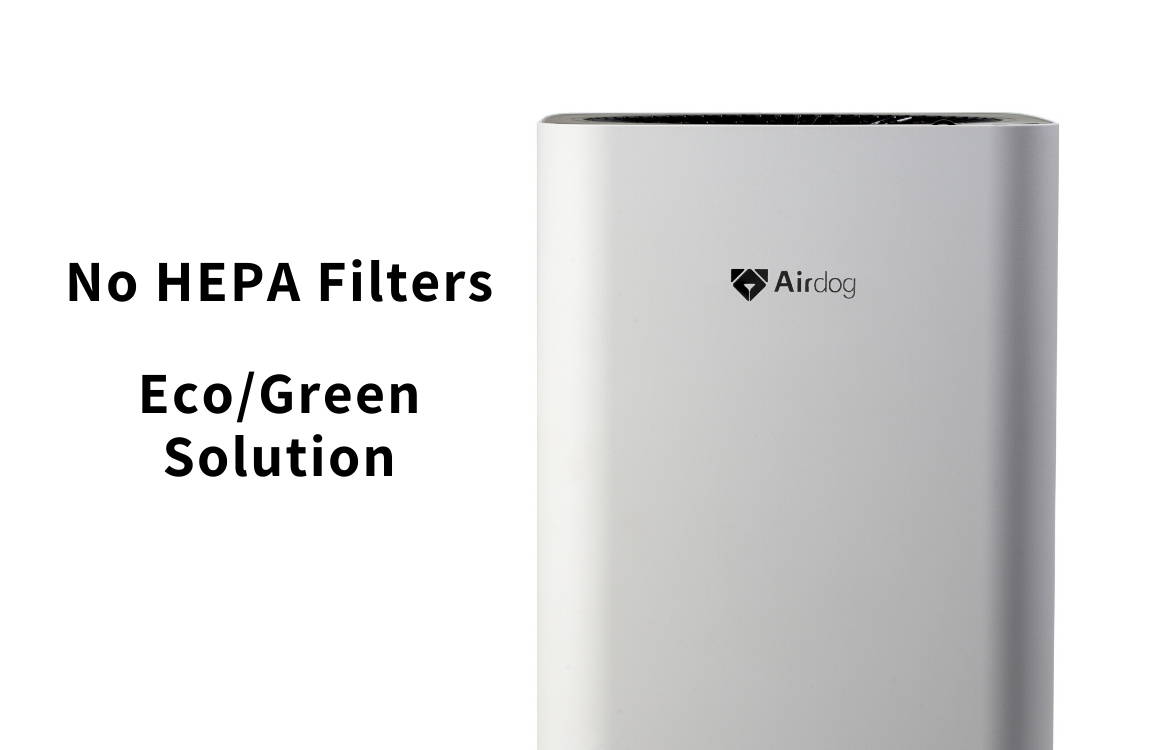 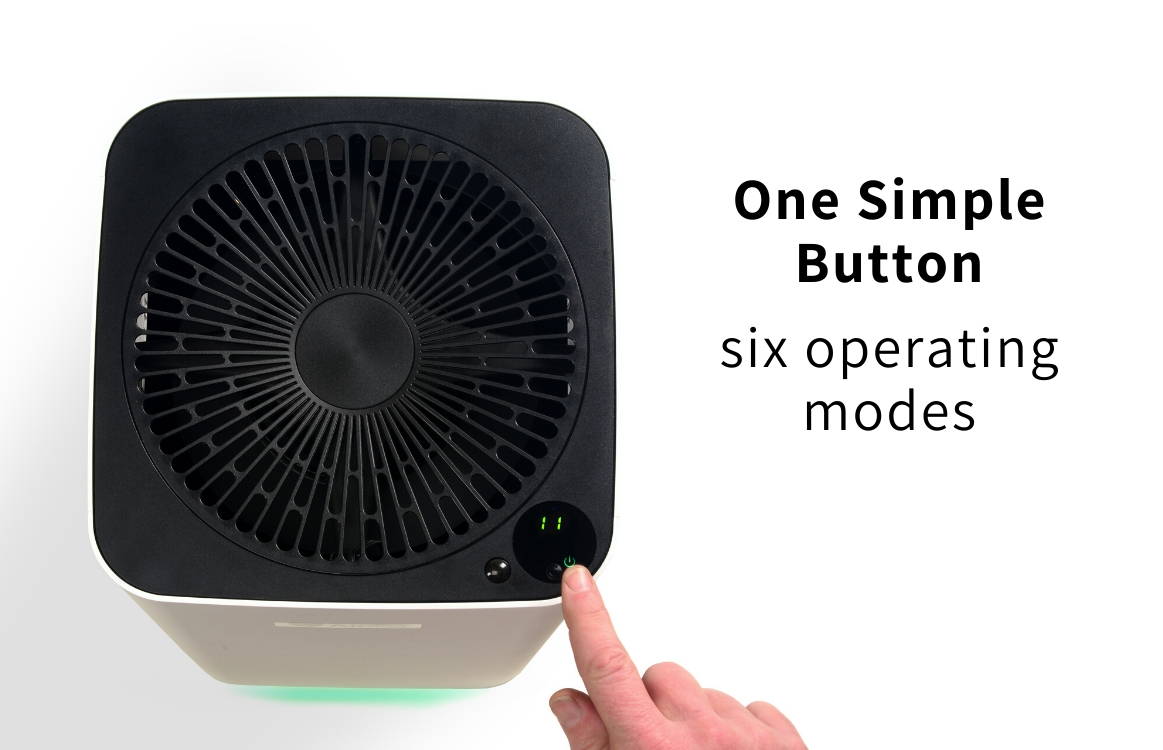 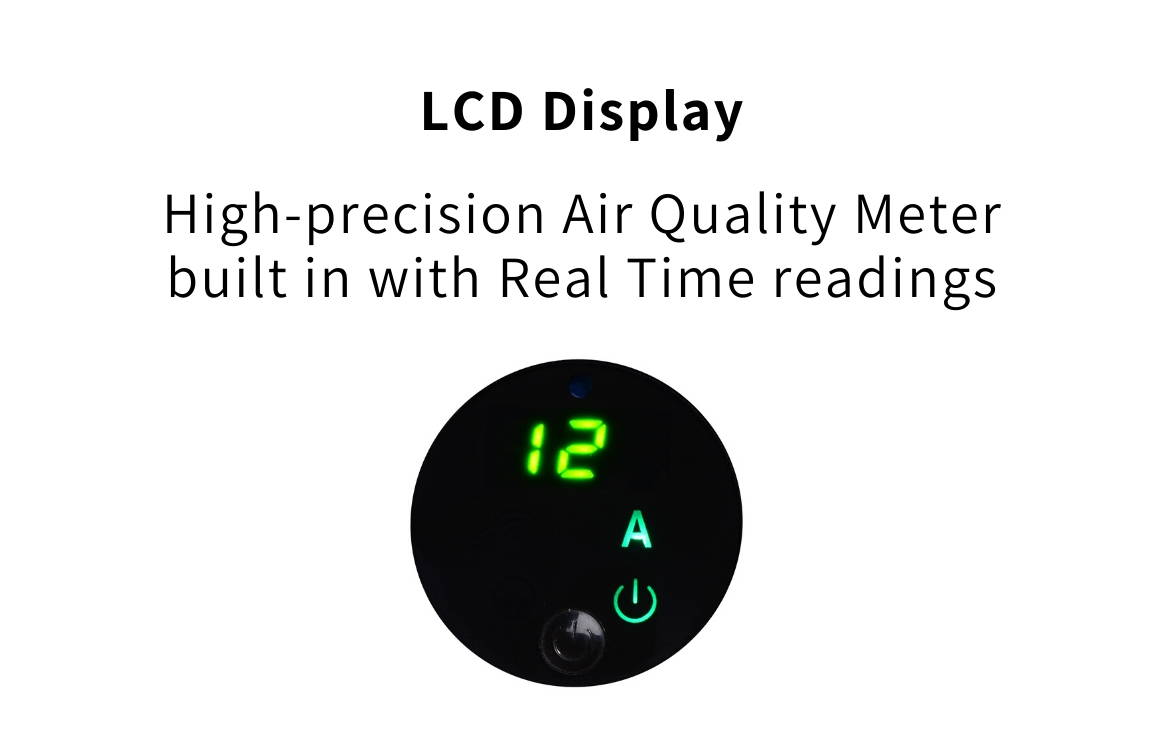 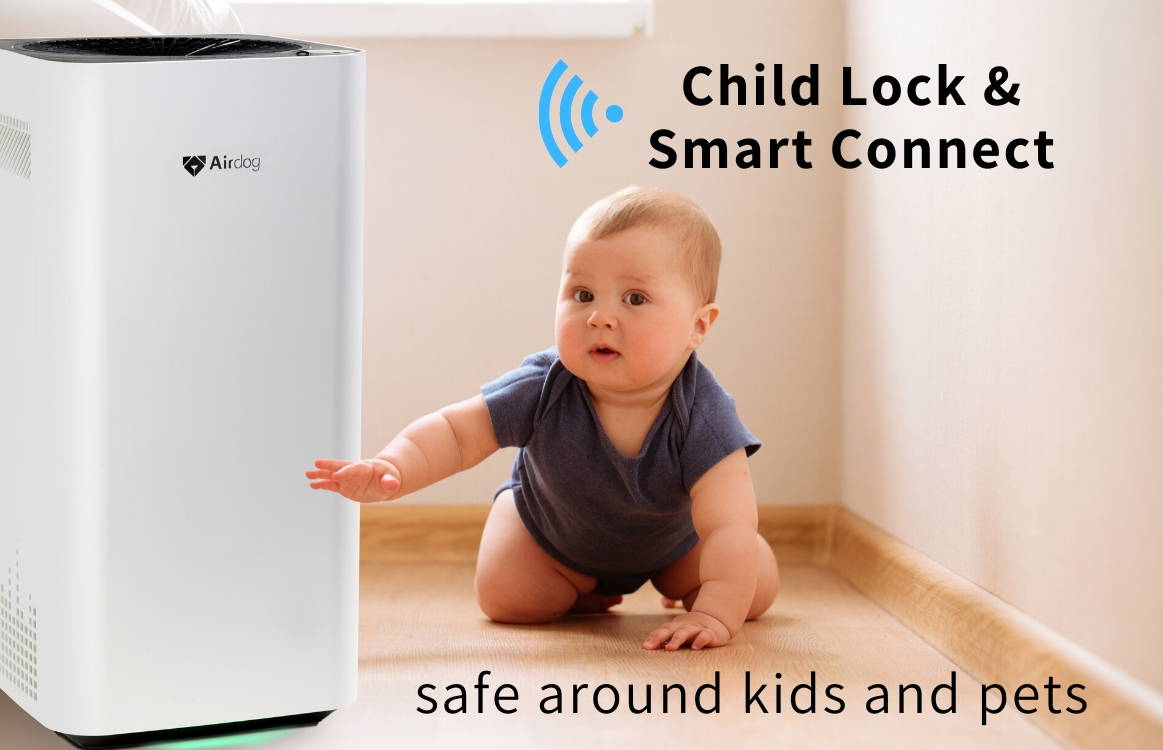 The EdenPURE® Airdog® is not intended to treat, cure, or prevent any disease.