You probably missed one of the best movies of all time

It has everything - football action, romance and business intrigue

Media Services Corp. has announced the re-release of Underdogs.

Are you tired of today’s movies that have no plot, poor acting and are mostly a string of computer-generated imagery?  Here’s one of the best movies of all time according to critics and viewers that you probably missed.

Underdogs is so good that it is one of those rare movies you’ll watch over and over again. Some movie reviewers said they could watch it 100 times. While most of today’s movies leave you depressed, Underdogs will uplift you and leave you happy. 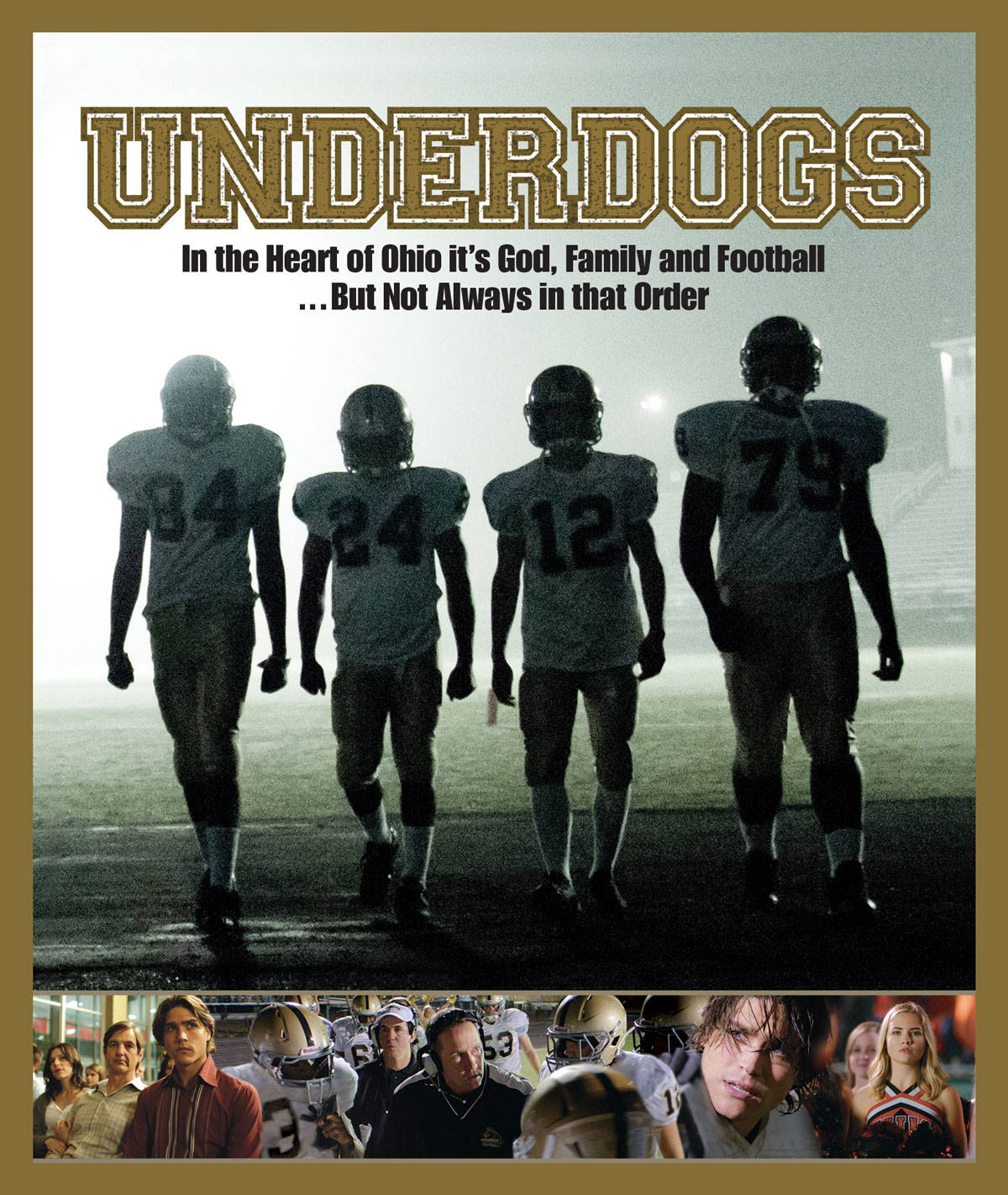 Critics said that the movie had superb acting, a great twisting plot that kept you on the edge of your seat, and had great cinematography. 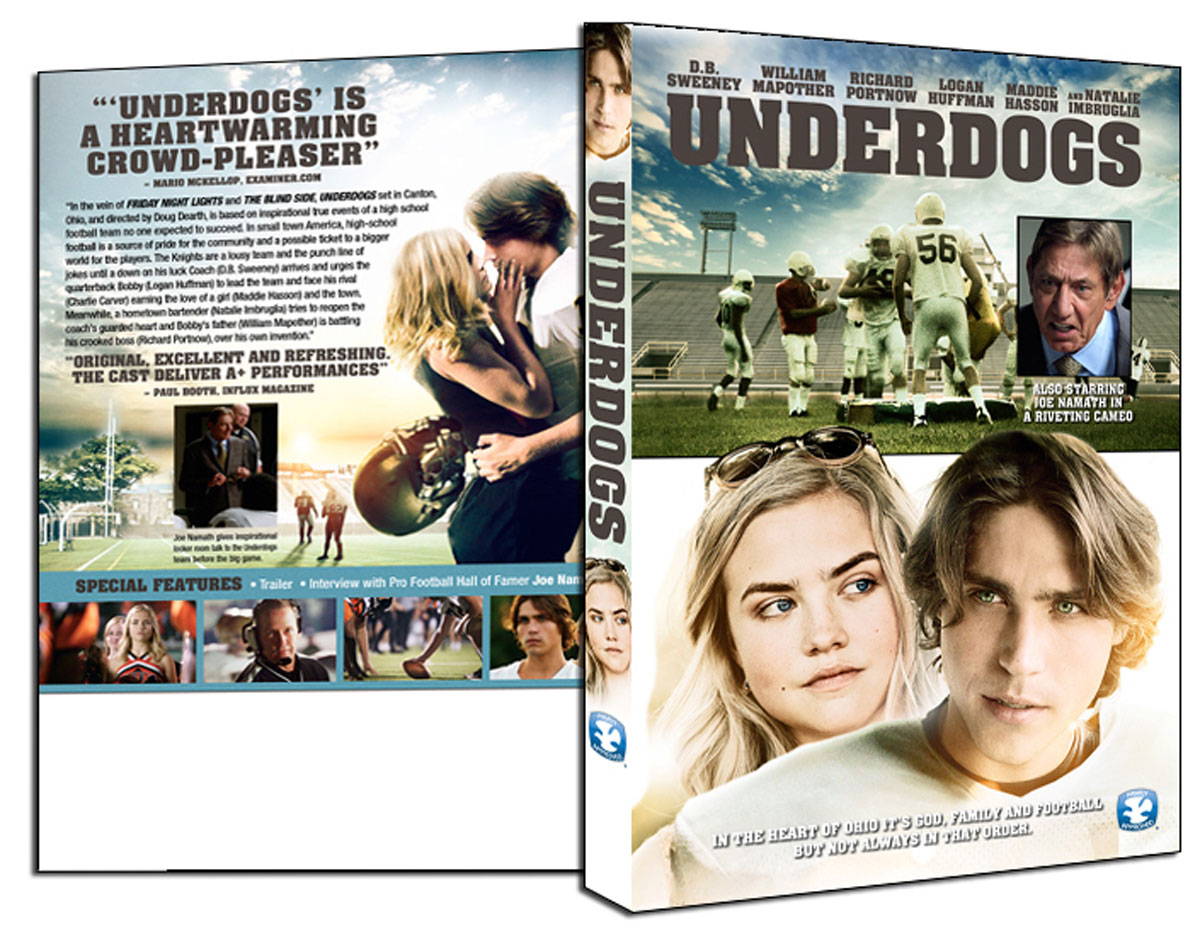 Here is the storyline of Underdogs, as reported by one of the critic organizations:

"In the vein of Friday Night Lights and The Blind Side, UNDERDOGS is based on inspirational true events of a high school football team no one expected to succeed. In small town America, high-school football provides its players a possible ticket to a bigger world and the community a source of pride. Filmed in Canton, Ohio, the Knights are a lousy team who’ve become a target for jokes. When down on his luck Coach DeAntonio (D.B. Sweeney) arrives, he pushes the boys to see their potential, while a hometown bartender (Natalie Imbruglia) tries to reopen his guarded heart. When quarterback Bobby Burkett (Logan Huffman) falls in love with a cheerleader (Maddie Hasson) from a rival team, it enrages their star John Handon (Charlie Carver). Meanwhile, Bobby’s father (William Mapother) is battling Handon’s dad (Richard Portnow), whose crooked corporation is suing him over his own invention. Director Doug Dearth’s heartwarming and rabble-rousing crowd pleaser will be sure to have viewers cheering!"

“UNDERDOGS ventures deeper than most films in the sports genre. Using football as a backdrop, director Doug Dearth has crafted a heartwarming film. Its message of believing in yourself, no matter the odds, will inspire the underdog in all of us.” – E.F., Cleveland International Film Festival

Rotten Tomatoes 4.5★ - Sports films are a dime a dozen. While the names, locations, and even the sport changes, the story rarely does, so what makes one film better than the rest? An eager young cast, a compelling back story, and a setting rarely seen before, all help Underdogs become that rare sports film that does more than just pump you up, it sticks with you and really makes you appreciate things that most people overlook. In Ohio, football is life, from the pros right down to the High School level and in the suburbs of Canton, Hoover is the name on everyone’s bumper sticker, but they’re not the only team in town. Across town is a division four team, the St. Thomas Aquinas Knights, a catholic school team that has never received any attention of any kind. Being a D4 team, even if they won all their games, they won’t be going anywhere. The players, while talented are uninspired, until a new coach comes to town and makes them believe in themselves. The film is based on a true story and stars V’s Logan Huffman as Quarterback, Bobby Burkett. Huffman is always one of these guys you see in the background of a film and never really take notice of. In Underdogs, much like his character, Huffman steps up and really puts on a performance that I never would have expected. On and off the field the character being portrayed is so profound, that anyone would have a hard time making him believable. Not only does Logan Huffman do the impossible, but he does so in such a compelling way, that I added everything he’s ever been in to my queue, once the film was over. Even though there is a lot more here than in your typical sports film, Huffman ties all the elements together, in a very special way, you seldom see anymore. To say his performance was legendary, truly does it a disservice. Even if you hate football, as a fan of movies, you should see this film just to witness the unbelievable performance of Logan Huffman, because he really was that good. As for the rest of the film, Underdogs was centered on football, but wasn’t entirely about the team, it was also about the town, and how different one side can be from the other. The story of this town is almost as interesting as what’s happening on the gridiron. Underdogs is a small budget, direct-to-video film, but much like the Knights, it packs a punch and really gives the big boys a run for their money. ~ Tss507813

Rotten Tomatoes 5★ - I’m a football fan, and I thought I was going to be seeing a standard feel-good come-from-behind story. I certainly wasn’t disappointed in that respect - the sports action had me on the edge of my seat - but interwoven were two other moving stories, one about young love, the other about an inventor who fights back against the tyranny of a big corporation. Put it all together and it’s a must-see. ~ Aric F

IMDb 9/10 - I’m a veteran of sports movies... “Rudy”, “We Are Marshall”, “One on One”—I grew up on them and still can’t resist the genre. So I’m well aware of the underlying metaphor of struggle and victory as it applies to daily life. I also hold a college degree in Literature, so I can sniff out cheese in a movie. “Underdogs” was refreshingly different.

Yes, I loved it because I grew up in the region-- in the cradle of the birthplace of football. But I liked “Rudy”, even though I’ve never worshiped the Football Jesus at Notre Dame. So, only minimal kudos for my love of place. I loved this movie because, unlike many sports movies, it was clear-eyed and real.

The cinematography was sharp and by no means low-budget. The camera was so omnipresent yet graceful that it was able to pick up the subtleties of actors’ expressions that catapulted the story along. The pacing was never slow either. The movie roared along like a high-school football season, with the viewer caught up in the play-by-play of the tumultuous season, as well as the companion struggle of the movie’s main protagonists. The movie really let its young actors tell the story, too, so the point of view came right from the characters’ hearts.

Although the adults in the film did the usual pontificating, it was really the kids’ story. As a veteran of many Film Festivals, I can say that this movie is not traditional Film Fest fare.

As Sally Sparrow said so well in an episode of British TV series “Dr. Who”, ‘sad is happy for deep people’. So not your typical Film Fest Sturm und Dang, but plenty of clear-eyed, uncliched retelling of the football myth and legend in our culture. ~ flowerchick-657-65354712

IMDb 10/10 - I just saw this film yesterday at the Cleveland International Film Festival. I must say, I was very impressed.

The overall cinematography is in line with most modern day multi-million dollar Hollywood productions, even though this was produced as an independent film and shot in less than a month in Stark County, Ohio. It’s amazing to see how far film makers can go when they actually have talent and aren’t relying on a bloated budget and over-hyped marketing campaign. UNDERDOGS shines in that the shots themselves are well composed and can, at times, even evoke emotion.

The actors and actresses all performed extremely well. Though this is a family-oriented film, there wasn’t a lot of “cheesy” moments or poor acting typically associated with those types of films. The characters themselves are very memorable and you could almost hear the audience praising the heroes and booing the villains as the film went on. There is enough humor sprinkled throughout to keep it from becoming too serious.

Though this was primarily a football movie, I found it quite engaging even though I didn’t understand a lot of the football jargon. The parallel plot of an employee fighting against his greedy employer really helps drive home the whole spirit of being an underdog, which most people can really relate to.

Amazon ★★★★★ - The writing was good, the cast was great, and the acting was very good. The best part is that the film is based on true stories and relatable to any of us “underdogs”. I could watch this film hundreds of times and not tire of it. ~ Amazon Customer

Amazon ★★★★★ - I thought it was a great storyline and I really like the acting of the main character played by Logan Huffman. I enjoyed Charlie Carver and also Richard Portnow. Richard is always good in everything that he does. Maddie Hasson also did an awesome job. I’m sure the budget for this movie was very low so Doug Dearth did a wonderful job with the finances he had and delivered an enjoyable movie. I plan on watching it over and over again. As an honorable mention, Ron Hulec nailed it taking the newspaper out of the dispenser and portraying disgust without saying word. Logan Huffman being my favorite my next favorite are Ron Hulec and Rob Combest portrayal of a bar patron was moving. ~ Craig Cope

Amazon ★★★★★ - This movie was actually pretty good. I am a huge fan of movies with sports in it. It had me on the edge of my seat rooting for them. ~ R.D. Hayes

Amazon ★★★★★ - I love movies that come from behind and win. ~ Patricia Farkas

Amazon ★★★★★ - Great family movie !!! My kids and I truly enjoyed it. It is Great for kids getting involved in sports. ~ Heidi Roderick

Amazon ★★★★★ - I like football movies, so maybe I am biased, but this is a really good movie. Much more going on off the field than on the field. ~ John Bernard

Amazon ★★★★★ - I thought it was going to be all football but it wasn’t. Great story line and not just one! Recommend it to all my friends. ~ Debra Dell

Amazon ★★★★★ - Underdogs is a well made movie that is suitable for the entire family. Two engaging story lines and some unexpected turns. Definitely worth adding to your family’s DVD library. This is the kind of movie you wish they made more of. ~ TikiDan

Amazon ★★★★★ - The much bigger story is of greed and power and betrayal! From the owner of the Hoover plant to the genius who invented EdenPure heaters and the backstabbing the “ little guy” a true story of inspiration, and determination all the way around! ~ Janet Postlewait

Amazon ★★★★★ - Love that this is based on real events. Also love the back story. It is true, “A man of integrity expects to be believed, and when he is not, he lets time prove him right.”~ Amazon Customer

Amazon ★★★★★ - Excellent movie with a great story line. A must-see movie. You don’t want to miss this movie. This movie would make a great gift. ~ The Wolf

Underdogs is available for Streaming Now, or buy it on DVD below to enjoy again and again.

• To Stream or Order the Underdogs Movie online click below:

Buy the Underdogs Movie NOW
Use left/right arrows to navigate the slideshow or swipe left/right if using a mobile device
ORDER BY PHONE: 800-360-1070